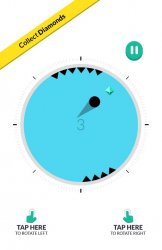 The most addictive game EVER, 360 degree will mess with your head and have you clicking that replay button for hours on end. Once you try this fantastic arcade style game you will be hooked forever!
In 360 Degree you guide your bouncing ball to a safe landing while avoiding the spikes and collecting rewards. Harking back to some of the very first classic arcade games, you are re-quired to swivel your compass to the right and left while watching your score climb in this addictive, fast paced arcade style game.
360 Degree has been hailed as one of the best free android arcade games with over one million people downloading it within the first month of its release.
So much more than a free arcade game, 360 Degree tests your accuracy, reflexes and reaction time and challenges the player\’s ability to multi task. Utilising the latest touch screen technology, the colourful graphics and clever gameplay make this game perfect for any age group – kids, teens and adults young and old.
In the latest release, 360 Degree has introduced a number of different tweaks to make things more interesting and challenging. There are different levels,various coloured balls to choose from, rubies to collect and you can even pick up shield so you can protect yourself against those spikes!
With these new releases the latest 360 is double the fun- try out the latest updated 360 Degree!! Unleash the ball to beat those evil spikes – PLAY ON!
FEATURES:
* Enjoy the touchdown of smooth and sleek angular motion
* Tap left or right to rotate the compass 360 degrees
* Collect Diamonds to gain points
* Collect Diamonds, Shields and Rubies to complete achievements and unlock levels
* Collect Rubies to change the look of your ball
* Test your reaction time and reflexes
* Simple, intuitive functionality
* Colourful interactive design
* Addictive and fast paced
—————————————
Thank You for all your fantastic feedback! We took your best ideas and packed them in to the latest 360 Degree update, making the best arcade game for android more addictive.

0
The famous little archaeologist Miss Jones has found the greatest treasure. But a trap has been set off ...
END_OF_DOCUMENT_TOKEN_TO_BE_REPLACED

0
Kill a few skeletons with a swipe of a finger? Sure, but what happens when hordes of skeletons ...
END_OF_DOCUMENT_TOKEN_TO_BE_REPLACED

0
Deadly danger and shocking mysteries can be seen not in the movies only… Help Dan to get out ...
END_OF_DOCUMENT_TOKEN_TO_BE_REPLACED