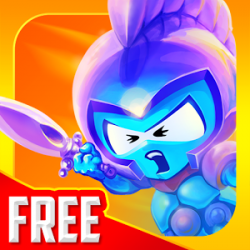 \”Adventures of Water Knight. Jump! Battle! Love!\” is a fairy dynamic arcade game with original gameplay, many knight quests and battles with monsters and dragons. You will move the brave Water Knight (he jumps in game like kids jumping jelly) across floating islands of Water Kingdom, pick up Water Drops for knight health, and send sweets and jewels to care for the Princess Iriel, all while fighting monsters and dragons that infest the hostile lands. Your daring knight will save the imprisoned golden fishes. You will equip your brave pocket knight with golden armor! Earn achievements and build a luxurious Water Castle with thousands of fountains for the Knight and Princess, unlock upgrades and additional features! The art style of Disney and \”Looney Tunes\” tempo in this fairy water knight game.
Have you ever heard about the Water Valor and the Water Courage? No? Then let me tell you the strange and wonderful tale of the Water Knight, who had no fear of his enemy\’s sharpest arrows nor strongest steel swords!
You can hear about different lords and knights but Water Knight is the best! The short love story starts:
The little Water Tribe lived in a beautiful Water Kingdom surrounded by thousands of musical waterfalls. No souls in the world were more pure and happier as they basked in the iridescent rainbow light and listened to the melodies of the crystal stream. The most beautiful and pure of them all was the Princess Iriel, who loved to play with golden fishes as she ran her fingers over the strings of her water harp, singing songs in her delightful voice about her native kingdom, captivating all who heard her voice that was carried by tireless winds.
But the king of Underworld Kingdom Volcano also heard Iriel’s singing…
Feel like a Knight! Fight terrible monsters and dragons! Build beautiful magical fluid castle in this fairy jump knight game!
The warrior prince game is waiting for a hero! It\’s an adventure time!
The developers have done reskin \”Behold the wizard!\” for Cartoon Network by this knight game. The release of this game was timed to the 20th anniversary of the channel Cartoon Network!
FEATURES of Water Knight game:
– An original dynamic gameplay (Jump! Battle! Love!).
– A lot of adventure knight quests for Water Knight.
– The battles with the dragons and monsters of Water Kingdom.
– Building of the best Water Castle.
– Short water love story.
– Princess dressing up and water jewels collection.
– Extraordinary atmosphere of the fairy kingdom.
Look for more: tips and tricks, story of creation, art and video on
https://www.facebook.com/waterknightgame
https://twitter.com/waterknightgame

Guide for Play & Download Adventures of Water Knight on PC,Laptop.

0
Dice Heroes is turn based rpg-strategy game where characters are dice.Dark times came down the Dice world – ...
END_OF_DOCUMENT_TOKEN_TO_BE_REPLACED