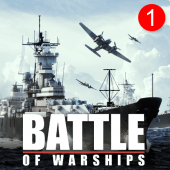 The average rating is 4.40 out of 5 stars on playstore.
If you want to know more about Battle of Warships: Naval Blitz then you may visit Cube Software support center for more information

All the apps & games here are for home or personal use only. If any apk download infringes your copyright,
please contact us. Battle of Warships: Naval Blitz is the property and trademark from the developer Cube Software.

Do you like warships? You are waiting for the best ship action for mobile – Battle of Warships.
Go control the legendary ships of past times, play with your friends and destroy the enemies!

In the fleet of Battle of Warships – more than a dozen ships of the First and Second World Wars. Feel yourself in the role of commander and manage a real military ship of any class. Use guns, airplanes and torpedoes!
In the Battle of Warships, you will encounter real ships of different maritime powers. Learn their features and advantages, create and improve your own fleet!

What will you find in the game:

• More than 20 warships. Including all the most legendary of the First and Second World Wars.
• Various classes of ships and miscellaneous weapons. From light guns, to torpedoes and planes!
• Unique system of improvement for each your ship.
• Modern three-dimensional graphics, corresponding to all the parameters of the best mobile games.
• Intuitive operation and several options, including a gyroscope!
• The weather change system on the game cards! Fight day and night!

Swing Battle of Warships and plunge into the world of warships, creating your own battle fleet!