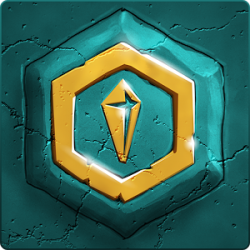 We are presenting to you the brain building tool, the boredom killer, the time accelerator machine – the Crystalux puzzle game.
Crystalux is the puzzle where you can move hexagonal chips collecting patterns of colored crystals. If the crystals with the same color make a line (connect) they light up but it\’s not a game’s goal. A level should become a form, a pattern, or a beautiful picture. If it is hard the game contains a lot of tips to cope even with the most complex patterns and make it more simple. Let\’s start!
But watch out!
First of all: after passing this puzzle game you ultimately train your brain and may get too smart for this planet!
Second: you will finally have fun at the office or on a date – just solving the puzzles.
Third: you might simple miss your station while connecting these hexagonal chips with crystals!
The game offers:
– 100+ secret patterns – and more coming up soon!
– The difficulty level provides optimal strength training for your brain.
– Solve the puzzle while relaxing to real zen chillout tunes!
– Let the crisp, clean lines of hexagons and the glow of the crystals soothe your eyes.
– Hints will help you advance, and your friends will never know!
NEW LEVELS is coming soon! Follow us on Twitter or Facebook and stay tuned for more news about our games.
Facebook: http://www.facebook.com/icecat.games
Twitter: http://twitter.com/icecat_games
VK: http://vk.com/icecat_games

0
Race for the finish line, spice up your selfies, flip the perfect pancake and more in this collection ...
END_OF_DOCUMENT_TOKEN_TO_BE_REPLACED

0
** CRASH BUG FIXED! In a number of instances some Android devices were not fully downloading the game ...
END_OF_DOCUMENT_TOKEN_TO_BE_REPLACED