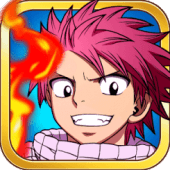 The average rating is 4.38 out of 5 stars on playstore.
If you want to know more about Fairy Tail-Guild Battle/Dragon then you may visit 삼성웰스토리 support center for more information

All the apps & games here are for home or personal use only. If any apk download infringes your copyright,
please contact us. Fairy Tail-Guild Battle/Dragon is the property and trademark from the developer 삼성웰스토리.

2015 most fun mobile game \”Fairy Tail\”！
You need to recruit Slayers in the Fairy Tail , to complete the task, to develop the strongest team!
Nearly 300 slayers, more than 100 kindsand equipment, allowing the player full of fun and surprises.
2015 most hot-blooded game hand travel shock attack!
Most fun Fairy Tail game are waiting for you! Natus and Lucy hope you can join them to save the Fairy Tail world!

[Game Features]– Authentic and colorful –
Restore the true image of the second element, respect the original
300 styles of Slayers, there is always your favorite one