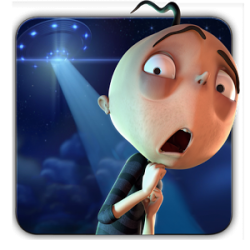 Figaro finds himself in the middle of a supernatural adventure – angry vampire bats, aliens armed with ray guns, and UFO’s with tractor beams. What\’s our phobic hero to do? He’s deploying his two favorite defensive tactics simultaneously – running and screaming. He does have other options, including the power to teleport his enemies into oblivion – very flashy! But Figaro’s no snob, he’ll go old school if it’ll get the job done – human cannonball anyone?
Features:
– 42 Levels
– Gorgeous animation and graphics
– Power-ups, obstacles and contraptions
– Achievements
– Based on an award-winning TV series

0
Dive now into the abyss, in an endless quest for survival. You are born as a fragile jellyfish, ...
END_OF_DOCUMENT_TOKEN_TO_BE_REPLACED