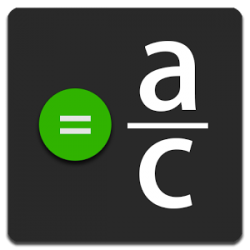 FractionsCalc+ is a program that enables to operate with fractions and view detailed process of their solving. Also it is able to cancel factors and has additional output result in decimal representation. The program is very effective and easy to use.
General features:
★ Display of solution algorithm available
★ Comfortable and fast way to input fractions
★ 4 operations with fractions: addition, substraction, multiplication, division
★ Additional output result in decimal representation
★ Various themes available
★ Pleasant and comfortable interface
Languages: English, Russian