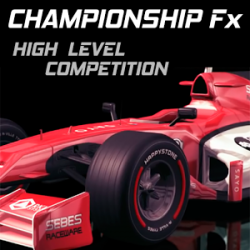 Unlimited FX-Racer is a game of high level competition, with exclusive cars. Compete in the world championship over 18 circuits.
Participate in timed races and get the fastest time in the world rankings.
Cars can be updgraded before each championship race. You can make improvements in engine power,
aerodynamics, tyre wear and bodywork\’s impact structure.
In race tyre degradation.
Car damage in collision.
Now all circuits have a PitLane for tyre change and car repairing.
Pit stops.
HUD with other pilot\’s pit stops.
HUD with position and distance of the car behind us.
All circuits are completely redesigned with new graphical improvements.
New car models with high level of detail.
Cash reward system in each race to spend in tyres, bodywork kits and car upgrades,
Steering hardness can be changed even during the race with in-game Sensitivity setting menu.
Camera smoothly tilts when steering with accelerometer.

0
Face off against real opponents and own the waves in real-time team battles – it’s sink or win.A ...
END_OF_DOCUMENT_TOKEN_TO_BE_REPLACED

0
Match-3 your way through beautiful, jewel encrusted mine while making new friends with cute little dragonlings in this ...
END_OF_DOCUMENT_TOKEN_TO_BE_REPLACED

0
Defend your homeland. Save the world.As commander of the dropship \”Salvation\”, you are tasked with rescuing Earth\’s inhabitants ...
END_OF_DOCUMENT_TOKEN_TO_BE_REPLACED