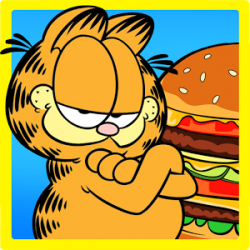 When food is in danger, even the laziest cat can turn into a mighty hero. Join your favorite lasagna-loving feline Garfield and his friends as they continue their battles with the food-stealing aliens in this innovative combination of role-playing game and match-three puzzle!
The Food Invaders are unrelenting in their hunger for conquest! Using their advanced alien technology, they transform food into horrifying constructs of evil to sow chaos and plunge the world into anarchy! Garfield cannot imagine such a dismal, lasagna-less future, so the lazy cat breaks out his claws to take on the extraterrestrial meatballs! Help Garfield and the rest of Arbuckle household to defend Earth from warmongering alien overlords!
Put your wits to the test by matching three or more food tiles to launch powerful combo attacks. Remember that the more tiles you match, the stronger your combos are, a few producing varying effects! Some enemies come with their own debuff abilities, such as sealing and petrifying your tiles, so watch out for them! Customize you own party, and choose from among Garfield\’s friends — each with their own special skill!
The fate of our planet hangs by a thread. Can Garfield save the world from the vile, deceptively delicious-looking aliens?
Features:
– 13 iconic characters from Garfield, including Jon, Liz, Nermal, Odie, and many more
– Clobber Food Invaders with each character\’s unique skill!
– Unlock special characters with coins!
– Adorable graphics
– Characters\’ costume change when they upgrade to a certain level!
– Fun and addictive!
– FREE!

0
CITY RUN LONDONCity Run London is a rescue adventure through the ancient gate-towers of Tudor London.With its bittersweet ...
END_OF_DOCUMENT_TOKEN_TO_BE_REPLACED