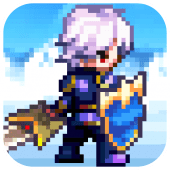 The average rating is 4.00 out of 5 stars on playstore.
If you want to know more about Gods War II – Blade of Lucifer then you may visit YCGame support center for more information

All the apps & games here are for home or personal use only. If any apk download infringes your copyright,
please contact us. Gods War II – Blade of Lucifer is the property and trademark from the developer YCGame.

An Interesting Pixel RPG game!!
In Chinese appstore, it reaches best 100 games since it is published !!!

The legendary Gods Wars series returns with a vengeance! Play the most intense and immersive hack ‘n’ slash game ever on mobile!

TONS OF OPTIONS FOR YOUR PROGRESS AND EVOLUTION
– Over 1,000 items to unlock over time or buy them right from the start if you can’t wait. Will you become the most powerful hero?
– Gain experience points with each completed arena and unlock new skills and new fairy attacks as you level up.

DYNAMIC ACTION RPG GAMEPLAY
Customize, level up and equip your hero with a massive array of options and skill charts!