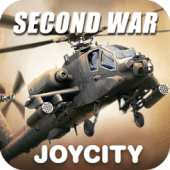 The average rating is 4.16 out of 5 stars on playstore.
If you want to know more about GUNSHIP BATTLE: SECOND WAR then you may visit JOYCITY Corp. support center for more information

All the apps & games here are for home or personal use only. If any apk download infringes your copyright,
please contact us. GUNSHIP BATTLE: SECOND WAR is the property and trademark from the developer JOYCITY Corp..

Confront to the era of the fierce battle when the spark of war has not gone yet!
Get on your Gunship and Conquer the Sky!

In 1950s, even though the war ended, Unknown Mercenary happened to get into an upheaval which arose again!
Be a member of it and Crisscross the battlefield with Spiritfire, Warhawk, Saetta, the most beautiful Gunship in history!
New Stories and New Gunships are ready for you! Enjoy the Graphic improved more than before! Cockpit Mode played in the first person has been introduced! Upgrade a variety of weapons and equipment & Customize them, and Be a master of the strongest Gunship!
Clear the special mission mode with the highest rank and be the best pilot by winning competition with other pilots!
Besides, you, the preliminary, will see the additional service different from the previous Gunship Battle!

Don’t waste your time!
Get on the Gunship now and Conquer the Sky!

★ The Feast of Various Gunships and Renewed Stories!

★ Get your own Gunship! More Various Weapon/Equipment Customizing!