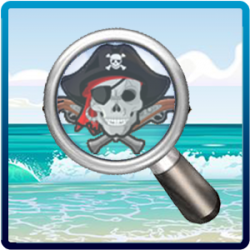 Ahoy, me Hearties! Come along and help the pirate captain Angrybeard and his crew to find the pirate treasure hidden on the mysterious Cave island.
*** No In-App Purchases! \’Pirate Treasure\’ is completely FREE game. ***
Can you solve the puzzle and find all the hidden objects?
This is a free, kids friendly, \’hidden Objects\’ game in which your seek and find items within the given time. Do not worry – this game doesn\’t punish mistakes: time is only important to get better result, that is – more \’stars\’ on each level. It\’s relaxing, fun and light hearted. Items are fairly large, clearly visible, although well placed. Game is dedicated to people who seek relaxation, not stress, when playing games.
The game play is simple: on each level, find a series of 20 hidden objects in a scene! Seek only objects that are shown in the bottom of the screen – otherwise, with every mistake, you\’ll lose some time.
So if you like this kind of games, this new FlashFooty app is made for you!
Come, try it now and share it with your friends!
Game features:
* Free hidden objects fun
* 7 interesting puzzle levels
* Funny pirate story with a twist
* Original graphics
+ My kids love it!

0
The Future is already here! Have you ever dreamed of driving the flying vehicle? This is your chance!This ...
END_OF_DOCUMENT_TOKEN_TO_BE_REPLACED

0
Welcome to endless running in the world of Magnobots!How far can you get them through?Control the speed of ...
END_OF_DOCUMENT_TOKEN_TO_BE_REPLACED

0
This is the best and most realistic 3D bowling game on the Android phones. It is the only ...
END_OF_DOCUMENT_TOKEN_TO_BE_REPLACED