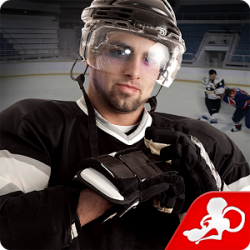 Drop the gloves and test your skills in this unique 3D hockey fighting game! Do you have what it takes to step on the ice?
The game is rough and the stakes are high. Fueled by pride or desperation, when it’s game time, nothing else matters. Once the players are ready to engage, they are bound for an altercation. Hockey Fight Pro is the only hockey fighting game available on the market. Real hockey fighting! Can you handle it?
*Not recommended for the light-hearted.
____________________________________
Presented by hockeyfights.com the world\’s largest hockey fight collection and community!
HOW TO PLAY
Using an intuitive control system, fight your opponents on the ice by executing punch combinations and unique combos.
TOURNAMENT
Complete the tournament mode to fight against 9 of the world’s most dangerous hockey fighters.
QUICK FIGHT
Fight against any opponent to improve your skills and practice your combos.
CUSTOMIZATION
Customize and upgrade your character’s attributes to improve their skills.
ACHIEVEMENTS
Complete 14 unique achievements while gaining additional respect points. Complete the game to unlock a special “hardcore” mode.
____________________________________
NEXT GENERATION GAMEPLAY
Stunning 3D graphics using the multi-touch capabilities of your device to simulate an authentic hockey fighting experience.
ONLINE GLOBAL LEADERBOARD
Submit your career stats to a global cross-platform leaderboard and become one of the world’s toughest hockey fighters.
LOADED WITH FEATURES
•The only 3D hockey fighting game available on the market.
•Intuitive controls for a realistic hockey fighting experience.
•Follow the interactive tutorial to learn the basics.
•Real-time damage system, see your opponent taking punishment.
•Next gen 3D graphics and full universal support phones and tablets.
•Fight against 9 of the world’s most dangerous hockey fighters.
•Execute over 40 unique combos and punch combinations.
•Gain respect from your opponents and upgrade your character attributes.
•View your fighting stats and replay highlights to improve your skills.
•Complete a list of over 14 unique achievements.
•Online global cross-platform leaderboard to become the world’s toughest hockey fighter.
•Share your victory with your friends on Twitter.
•Complete the game to unlock a special hardcore mode.
•Support for multiple profiles and extensive game options to adjust the game to your preferences.
ABOUT HOCKEYFIGHTS.COM
In praise of the tough guy. hockeyfights.com provides an outlet for fans to follow their favorite old school hockey players, past and present.
____________________________________
SUPPORT: http://en.ratrodstudio.com/support/
VISIT US: http://ratrodstudio.com
FOLLOW US: twitter.com/ratrodstudio

0
You are man\’s last hope against utter extinction. Located on a distant colony in the Osiris system, you ...
END_OF_DOCUMENT_TOKEN_TO_BE_REPLACED