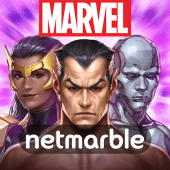 The average rating is 4.60 out of 5 stars on playstore.
If you want to know more about MARVEL Future Fight then you may visit Netmarble Games support center for more information

All the apps & games here are for home or personal use only. If any apk download infringes your copyright,
please contact us. MARVEL Future Fight is the property and trademark from the developer Netmarble Games.

The Avengers…Spider-Man…the Guardians of the Galaxy! You can unite the greatest heroes from all corners of the Marvel Universe for the epic battle that will decide the fate of all realities – MARVEL Future Fight!

S.H.I.E.L.D. Director Nick Fury has sent a dire call from the future: The multiple dimensions of the multiverse are collapsing upon each other – and it’s up to you to ensure humanity survives! Gather the mightiest Super Heroes and Super Villains, assemble your team, and protect the universe at all costs!

ASSEMBLE YOUR TEAM! – Create your squad from Avengers like Hulk, Iron Man, and Captain America, as well as other famous Marvel heroes like Spider-Man and Daredevil! Upgrade your weapons and master your skills to give your team the ultimate power-up using a deep RPG leveling system.

EPIC 3v3 BATTLES! – Test your mettle against other players in 3v3 battles! Choose from four unique hero types – Combat, Blast, Speed, and Universal – then pit your champions against your opponents’ teams for supremacy.

SUMMON ALLIES – Need a little help to get through the next Super Villain battle? Summon your friends via the Ally System for reinforcements and claim victory as a team!

EASY TO USE, ONE-FINGER CONTROLS – Play with just a single finger, or use the virtual control pad to guide your team through the Incursion and defeat your foes!