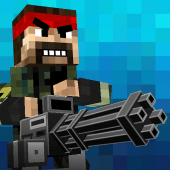 The average rating is 4.20 out of 5 stars on playstore.
If you want to know more about Pixel Fury: Multiplayer in 3D then you may visit Blue Arrow Games support center for more information

All the apps & games here are for home or personal use only. If any apk download infringes your copyright,
please contact us. Pixel Fury: Multiplayer in 3D is the property and trademark from the developer Blue Arrow Games.

Try Pixel Fury: 3D Multiplayer shooter where you can fight against players worldwide! In this FPS pocket edition you can use multiply guns (from axes to sniper) and play with friends on awesome maps!

IN THIS WORLDWIDE MULTIPLAYER YOU CAN:

+ Battle against friends with wide variety of guns including bazookas, mini gun, axes, shotguns, combat rifles, sniper, UZI, AK, RPG and many other!

+ Customize your character with VAST SELECTION OF DIFFERENT SKINS!

+ Play on multiply AWESOME MAPS which are all UNLOCKED!

+ Cause HAVOC: Throw grenades, sniper the enemy, shoot with bazooka!