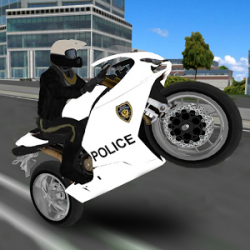 Patrol the city streets with a fast motorbike in the latest police sim, Police Moto Bike Simulator 3D. Explore the vast city landscape with a upgraded police super bike. You will be able to ride around looking for any trouble being caused. Race through traffic and gain high speeds with the upgraded nitro boost to get to the crime scene as quick as you can. Feel the need for speed and thrill of justice while riding the super charged police moto bike!
FEATURES:
– Massive, highly detailed open city environment
– Upgraded Police super motorbike, fast and agile to dodge cars
– Responsive A.I. Traffic
– Perform insane stunts by jumping off ramps and buildings
– Simplistic, easy to use motorbike driving controls, both touch and tilt!
Ready to go to top speeds, blast past sports cars with nitro boosts, fly off stunt ramps and do crazy jumps across the giant metropolis city? Pick up the controller and download the latest entertaining police bike simulator game, Police Moto Bike Simulator 3D!

0
This is the best and most realistic 3D bowling game on the Android phones. It is the only ...
END_OF_DOCUMENT_TOKEN_TO_BE_REPLACED