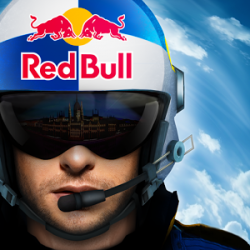 Red Bull Air Race – The Game is the no.1 air racing game worldwide!
Brand new 2015 season. New planes, new pilots, new locations and two new types of tournaments, the 2015 Virtual World Championship & Regional World Tournaments !
Race to new limits with this breathtaking new 2015 update. Faster planes, bold new pilots and breathtaking new locations take you on the flight of your life.
It takes using speed, precision and skill to claim victory in the global Red Bull Air Race Championship. Strap yourself in and download today!
PILOT TRAINING TO MASTER CLASS
Quickly progress from Challenger Pilot to the Master Class across 200+ races, events and real pilot head to head rounds.
STUNNING LOCATIONS
Fly through a huge single player campaign and fierce regional tournaments all set in spectacular international locations.
PILOT THE BEST PLANES
Fly the fastest racing planes in the world. Designed to be as agile in the air as possible and streamlined to perfection. Visit the new hangar to improve your plane’s performance with plenty of modifications!
Each pilot has their own specially engineered plane and custom paint job.
NEW REGIONAL TOURNAMENTS AND THE 2015 VIRTUAL WORLD CHAMPIONSHIP
Will you join us on the podium this year?
Have you got what it takes to race alongside the Master Class pilots? Fly each of the eight virtual racetracks as the real life battle unfolds throughout the season and show us you’ve got what it takes to win a World Championship.
As we cross the globe to compete on three continents, you can play the official ‘Red Bull Air Race – The Game’ and can test your skills by racing online as the action happens in real life at each of the stops.
The 2015 Virtual World Championship starts as we head to Chiba in Japan and winners of each round will win an exclusive prize from the Master Class pilot who takes the victory. The overall virtual World Champion will also be invited to Las Vegas to take their place on the podium and experience the thrill of a real flight in the racetrack!
We’re excited to see just how good the world’s best virtual pilots are! You’re officially cleared into the track…
FLY LIKE A PRO
Touch or Tilt controls, you decide. Effortlessly supports multiple control configurations for tilt and touchscreen. Accelerate, bank and pull vertical turns to earn a spot on the Red Bull Air Race podium.
BUILT FOR MOBILE, AMAZING ON YOUR TABLET OR PHONE
Vivid graphics, incredible speed. One universal game perfect for your mobile device. Experience the thrilling victory of the Red Bull Air Race wherever you are.
IMPORTANT
Minimum requirement: 1GB Ram
Minimum Android OS: 4.1 or newer
Minimum screen resolution: 800×480
Recommended:
Android device manufactured in 2013 or newer
If you encounter any issue please contact us at http://games.redbull.com/at/de/site/contact
Do you have what it takes? Visit http://www.redbullairrace.com/thegame

0
Hey Bandit! Save the Princesses wrapped in a vicious nightmare of the Great Evil and earn their treasures. ...
END_OF_DOCUMENT_TOKEN_TO_BE_REPLACED

0
The nefarious cats have unleashed a devastating attack, destroying our peaceful home. As man\’s best friend, it\’s your ...
END_OF_DOCUMENT_TOKEN_TO_BE_REPLACED

0
Hop Hop Away is a puzzle action game about the abused bunnies living in the EVOL circus.Help the ...
END_OF_DOCUMENT_TOKEN_TO_BE_REPLACED