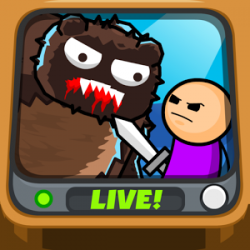 *PLEASE SUPPORT OUR KICKSTARTER – the Darkmoor RPG tabletop game* Spread the word: http://tinyurl.com/kickstartrpg
The year is 2019 and everyone\’s bored of TV, celebrities and games. Everything is inflated.
S U P E R B O Y S – The Big Fight, is an ultra violent TV show where fighters from across the globe form teams that clobber each other to win money, toasters and blu-ray players.
The overpowered Heroes and Bosses of old games are being crushed and have to team up to survive the onslaught against an enemy they cannot defeat, the new Super Boys.
Featuring characters from all of our worlds (Maximus, Toon Shooters, Blackmoor, Bearadise+) and a special appearance by… the Purple Shirted Eye Stabber from Cyanide & Happiness (explosm.net)!
Features:
* 53 unique playable characters (6 types, Warriors, Undead, Toons, Techs, Beasts & Wizards)
* Team building, assemble your own combination of fighters compete for big prizes
* 20 arena maps
* Ascend the Tower (of Big Dreams) , 100+ stages
* Realtime PVP compete for ratings, Tag-Team or FFA (8 Player) – bash your friends up
* Ladder PVP compete for weekly prizes
* Cross platform (Android & iOS) & Cloud saving
* Incredible face smashing music by Matthew Pablo
Recommended
* iPhone 5/iPad3/Galaxy S4 and above
This game does contain a few in-apps, but all content is unlockable through gameplay, just like our other games!
Follow us on social media 🙂
http://www.facebook.com/mooffgames
http://www.mooffgames.com
http://www.twitter.com/mooffgames
Matthew Pablo is an incredible composer that we had the pleasure to work with. If you want to hear more passionate pieces go check out his site, and even drop him a line.. he\’s cool dude
http://www.matthewpablo.com

0
No races, no rules, no barriers! Drive anywhere you want, break everything and take down other drivers for ...
END_OF_DOCUMENT_TOKEN_TO_BE_REPLACED

0
Concept:Are you tired of endless games that getting to the end of them seems impossible ?Do you want ...
END_OF_DOCUMENT_TOKEN_TO_BE_REPLACED