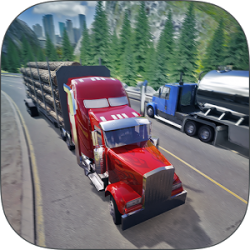 ** LAUNCH SALE! — NOW 30% OFF **
Start the engine and feel the power of huge trucks while driving through US cities and roads in this advanced truck simulator. Build and expand your transporting empire by unlocking new trucks, hiring other drivers and exploring new cities.
Avoid collisions and speeding tickets, keep track of the fuel consumption and fatigue in order to always deliver your cargo on time. Push your endurance, skills and speed to the limit and become the best trucker – the king of the US roads.
Features:
– Transport a variety of cargos across different US cities
– Own, customize and upgrade trucks including American and European classics
– Hire other drivers to earn additional money
– Drive across the USA and explore different cities and routes
– Advance and unlock new missions with different cargo and better payouts
– Realistic fuel consumption, truck and cargo collisions which affect your wage
– Experience open world gameplay and compete with your friends in global rankings
If you are looking for the most advanced truck simulator for mobile phones and tablets, look no further. Play Truck Simulator PRO 2016 now!

0
You\’ve crashed landed on Mars! Now it\’s up to you to join the space crew of Apollo 741 ...
END_OF_DOCUMENT_TOKEN_TO_BE_REPLACED

0
the OUTBREAK has EVOLVED with even more ZOMBIES and GUNS! GRAB GUNS FOR TWO and start PUMPING LEAD!The ...
END_OF_DOCUMENT_TOKEN_TO_BE_REPLACED

0
My boyfriend left me and my heart is broken. What should I do?It\’s no big deal!!! I should ...
END_OF_DOCUMENT_TOKEN_TO_BE_REPLACED