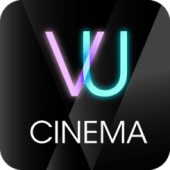 The average rating is 4.00 out of 5 stars on playstore.
If you want to know more about VU Cinema – VR 3D Video Player then you may visit VU Studio support center for more information

All the apps & games here are for home or personal use only. If any apk download infringes your copyright,
please contact us. VU Cinema – VR 3D Video Player is the property and trademark from the developer VU Studio.

An amazing Cinema VR App. VU Cinema – VR Video Player allows you to watch the video as you go to the theater / cinema. The virtual scene of theater / cinema is presented with 3D scene.
An easy control way has been provided. All functions of this App could be controlled via \”Gaze Selection\”. In the other word, you don\’t need to take out your phone for function control.
Furthermore, “Auto Quality Control” gives you a better movie-watching experience that will definitely impress you.

If you like this VR Cardboard App, you could buy the PRO version for full function. For now, App is on sale for only $0.99 US dollar (Original Price is $2.99 US dollar)
(Screen will be blocked after 15 minutes use in the Lite version.)

P.S. This is a VR cardboard app; it only works with Google Cardboard Virtual Reality Headset.