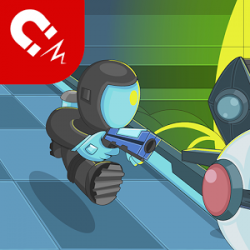 Blast through 30+ levels of shoot’em up / arcade platforming gameplay! Test your reflexes, avoid obstacles and take aim
at the corrupted machines of the Blasttopia INC. factory.
-LIMITED TIME 30% OFF!!
Get the game while it’s fresh and get a 30% discount!
You will run, jump and shoot your way to the evil mainframe and you will encounter many challenging enemies along the way. Do you have what it takes to save mankind from a robotic revolution?
-STORY-
The Blasttopia INC. Factory is operated by a powerful A.I. One day it decides that it wants to take over the world and start a robotic revolution. It orders all of the factory’s machines to destroy mankind and build an empire.
Luckily there is Rob on the job who keeps an eye out. Normally a boring job that consist of watching tv, drinking coffee and eating donuts, but today it is about saving the human race.
-FEATURES-
• A shoot’em up mixed with run and jump style gameplay!
• Simple two touch controls that is easy to learn, hard to master.
• Run, jump, fly and shoot your way to the evil boss.
• Expect many hours of gameplay through 30+ challenging levels.
• Upgrade your weapons to insane proportions.
• Visit many different environments and enemies.
• Earn medals and unlock new suits.
-HOW TO PLAY-
Press on the left side of the screen to jump.
Press on the right side of the screen to shoot.
You can also fly in mid air by holding the left side of the screen.

0
Explore the world of Angry Birds like never before in Angry Birds Action! – a fast and furious ...
END_OF_DOCUMENT_TOKEN_TO_BE_REPLACED

0
Express yourself through (unconventional) architecture.Frantic Architect is a one-finger physics-based builder. Block by block, shape unique and unusual ...
END_OF_DOCUMENT_TOKEN_TO_BE_REPLACED