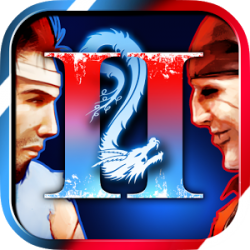 Brotherhood of Violence 2 – Blood Impact puts your fighting skills to the test with stunning 3D graphics, multiple fighting disciplines, and more than 400 ever evolving fighters that learn through artificial intelligence. Battle your way through 30 environments to defeat punks, ninja, Yakuza and more. Watch out for the Big Boss. He has it in for you and his skills are unmatched! Click \”…More\” to learn why you should download this Game today!
You\’re a former member of an elite brotherhood of assassins. The problem is, with this brotherhood there\’s no such thing as a \”former\” member. You knew the Big Boss would try to drag you back in, but you never thought he\’s kidnap your brother to get to you. Now you must follow the way of the warrior to find him and bring him home.
#4 Best 3D Games on Android 2013
Geek 20
http://www.geek20.com/best-3d-games-android-2013/
#5 Top Five Fighting Games you can\’t miss
http://news.mmosite.com/content/2013-06-18/top_five_fighting_games_you_cant_miss_5.shtml
Brotherhood of Violence Features Include:
* High end 3D engine
* Multitouch, third-party controller (Bluetooth) support
* Explore 30+ unique environments
* More than 400 different stylized opponents to defeat!
* Choose from 12 unique fighters or create your own with a deep character editor (features: face, complexion, weight, clothes, accessories and more)
* Evolving fighters AI will keep you entertained
* Play daily challenges: Hitman, Battle Royale and Survival !
* Brag about your skills on Facebook
* In-App purchases available for game credits, unlocking more companions, more attacks styles, new abilities, clothes and more!
* High quality character animations with 12 different fighting styles: Boxing, Muey-thai, Feral, Kung-fu and Karate
* Stunning graphics, full 3D characters, advanced lighting and an unprecedented level of detail
* Intuitive controls with jump, roll, attack, quick time events, super moves and more!
Equip your character, learn your fighting technique. What\’s it going to be? Muay-thai? Kung-fu? With five different disciplines to choose from, you\’re ready to jump right into the middle of the action!
Get lost in the story with amazing cinematic effects, awesome lighting and intricate detail as you fight to rescue your brother. Your opponents learn through AI, so they\’re constantly evolving and learning your moves. What works for one bad guy today, may not work tomorrow! It\’s a tough fight, but you can get help if you need it. You can always unlock a companion to help you along the way.
Three levels of difficulty ensure that you\’ll never be bored as you perfect your fighting style. All you have to decide is whether to follow the light path of the warrior, or go into the dark. Download Brotherhood of Violence, the amazing brawler on Android now and get your brawl on!
Supported devices: Snapdragon S2 ( Adreno 205, 220), PowerVR SGX 540, Tegra, Intel devices.
Recommended: Mali MP400, nVidia Tegra 3 or Snapdragon S4 (Adreno 230)
* Optimized for Xperia Play.
* Compatible Nexus Player.
* Play it on NVIDIA SHIELD / NVIDIA SHIELD TABLET and Android 5.0 Lollipop
* Keyboard and USB joystick supported (including Gametel and MOGA).
Brotherhood of Violence is now MOGA Enhanced! Available at major retailers, carrier stores and online at http://www.MOGAanywhere.com

Guide for Play & Download Brotherhood of Violence II on PC,Laptop.

0
Chess Free is the best free Chess game on Android and is currently the highest ranked (at time ...
END_OF_DOCUMENT_TOKEN_TO_BE_REPLACED

0
An action-packed online fantasy RPG!Enter the world of Nine Hearts and defeat the evil forces to restore peace ...
END_OF_DOCUMENT_TOKEN_TO_BE_REPLACED

0
An Innocent Exploration Game that feels like a relaxing morning stroll, it’s a 2D flight game set in ...
END_OF_DOCUMENT_TOKEN_TO_BE_REPLACED