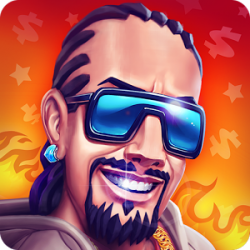 Can you handle a heist homie? So gangster you make Tony Montana look like Hannah Montana? Then become a Godfather and bring annihilation to Crime Coast.
In a lawless crime city that even cops and DEA fear, crooked criminal kingpins are law. GTA\’s got nothin on this town. Cons and conflict rule as ruthless thugs break into fray, skirmish for loot, and hit up a robbery with a side of mayhem. Like an overflowing toilet scum always rises to the top of this criminal paradise. Are you the goon for the job?
No villain can battle, nuke and raid Crime City solo, and you\’re more Charlie Brown than Walter White. Combat rebel gangsters to be feared by crooks and cons, but first you need your own goons. Be the kingpin of combat, conflict, robbery and butchery to create carnage and mayhem like the godfathers of old.
Hire thugs, henchmen and hooligans to beef up heist crews for skirmish raids, and post-mayhem hire bad boy hustlers to rage the DEA. But you\’ll only plunder a few bucks from a fray with drug dealing cons, so earn fortunes in loot from mafioso protection, breaking and entering, drug conflicts, bank raids with bad hommies GTA style, and a ruthless criminal empire to make the Sopranos cartel look like girl scouts. Skirmish in this crime city of sin, drugs and conflict and become Godfather to a crooked underworld paradise of rebel raiders, goons and crews. By the end you\’ll have more dough than your fat momma\’s pizza chef!
So you\’ll commit robbery, bully rival hommies with mob henchmen, rule an underworld paradise of sin then coast off into a lawless sunset with a killer criminal kingpin\’s fortune? Nope! No easing up on the carnage, conflict and annihilation! If the fray\’s done on your turf then bring heists, annihilation and mayhem to rival gangsters. Take the battle to new cartels by raging and raiding their plunder and loot sending those crooked cons into a rage. Go it alone for solo carnage; or team with rival raiders for a skirmish to nuke those scum cartels into dust. You can\’t do that on GTA!
A lawless paradise needs a crooked boss bully to make the DEA mess their shorts. A villain kingpin of raiding, robbery and heists. The Corleones? More like the Brady Bunch! A Godfather so ruthless you\’d order a hit on your aunt Ruth. To earn big bucks, bully the DEA, and lead lawless rebels through this crime city you need big brains, a heart of sin, lust for carnage and combat, and cojones so big they can wreck a house. Oh, and a handgun. Forget earning small-time bucks on GTA. Are you ready to become the ultimate Godfather and steal your fortune?
✔More broke than chairs in the Kardashian house? No probs homie. The fray is free in Crime Coast.
✔Build a gangsters paradise of ruthless henchmen, hooligan goons and crooked criminal carnage.
✔Do heists to loot gold, run underworld drugs cartels and have assassins raid rival mob fortunes.
✔Take a crime city game nuked with enough mayhem and butchery to make GTA look PG, and you still won\’t have nothin on Crime Coast!
✔Build bully boy raider junkyards and missile silos to hit rival hooligan gangsters with total annihilation.
✔Busted your car in a raid? Need a getaway hommie? Your henchmen will battle cops and plunder their ride after a robbery!
✔Form battle cartels of rebel hooligan mobs with other villain gangs and enjoy raiding weaker goons.
✔ Betray rival scum drug lords and loot gold from their henchmen as they rage when the DEA finds their drug stash.
✔ Be a real kingpin. Combat gangs of raging underworld henchmen. Buy handguns and nukes then let loose in skirmishes, frays and lawless plunder.
We would love to hear from you! Please send feedback to support@pixelsquad.net.
PLEASE NOTE!
While Crime Coast is free to download and play, some game items can be purchased for real money.
A network connection is also required.
Privacy Policy
http://www.crimecoast.com/privacy-policy
Terms of Service
http://www.crimecoast.com/terms-of-service

0
My boyfriend left me and my heart is broken. What should I do?It\’s no big deal!!! I should ...
END_OF_DOCUMENT_TOKEN_TO_BE_REPLACED

0
= MEDIA COVERAGE =\”I have to admit, I was pleasantly surprised by Heroes Tactics.\” – GamezeboAssemble the ultimate ...
END_OF_DOCUMENT_TOKEN_TO_BE_REPLACED

0
You are a powerful mutant beast battling through a terrifying laboratory run by merciless mechanical guards. Defend yourself ...
END_OF_DOCUMENT_TOKEN_TO_BE_REPLACED