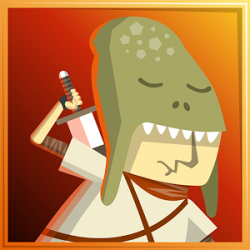 Middle of the summer… Middle of the week… An ordinary morning flowed in a completely ordinary day. Shepherd Gamli lazily pasturing his small flock of sheep at the foot of the mountain. The locals called this mountain the Great Malgora, and old men claimed that it is the dormant volcano, in which for more than five thousand years imprisoned evil spirit Khang. And of course there were no signs of trouble that day. Gamli strummed a simple melody on the flute… Suddenly the earth shook and Malgora, spitting out the plumes of ash and smoke, with a solemn rumble woke up! As if the spirit of Khang was released from an imprisonment. Day became night! In the air unbearable smell of sulfur! In all directions flew the incandescent fragments, threatening to destroy all life for a miles around! Looking at the stones falling around, Gamli understood what to run already late. He pulled up his pants, pulled out his trusty sword, and prepared to save himself and his sheep.
Are you ready to enter unequal fight against elements? Well, welcome to the \”Gamli\’s Feat\”!
– Original, bright graphics
– Incredible bonuses
– Endless gameplay
– One-finger controls
– Worldwide leaderboard
– Achievements

0
They found us! We need to transmit collected information to our base. Give us time!Manage ultra – modern ...
END_OF_DOCUMENT_TOKEN_TO_BE_REPLACED

0
This adventure will turn your world upside down. Delve up the darkest secrets of the mystical city and ...
END_OF_DOCUMENT_TOKEN_TO_BE_REPLACED

0
The simplicity of the game Hard Jump 3D is deceptive. Do you think it will take you only ...
END_OF_DOCUMENT_TOKEN_TO_BE_REPLACED