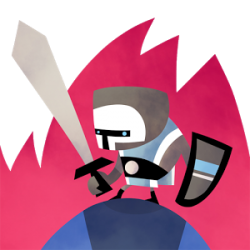 ** The critically acclaimed dungeon crawler finally comes to Android devices **
There are dark places in the world inhabited by evil denizens. Places filled with danger and foreboding where no ordinary man would dare to journey. However, there are a few who are willing to risk death in the name of good, in the name of justice, in the name of.. valuable loot!
Hack, Slash, Loot is a single-player turn-based dungeon crawler. Take control of a lone hero and explore sprawling dungeons, fight dangerous monsters, and most importantly, plunder valuable treasures.
Hack, Slash, Loot features thousands of items, monsters, and dungeon features, and with a new dungeon created every game you can be sure that no two plays will ever be the same. Boasting easy to master controls you\’ll be adventuring in no time, but there is still enough depth to challenge the most hardened of adventurers.

0
\”Angry Norris\” is an online top down shooter for PC, Mac, Linux, and Mobile devices for the lovers ...
END_OF_DOCUMENT_TOKEN_TO_BE_REPLACED