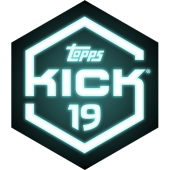 The average rating is 3.80 out of 5 stars on playstore.
If you want to know more about KICK: Football Card Trader then you may visit Topps support center for more information

All the apps & games here are for home or personal use only. If any apk download infringes your copyright,
please contact us. KICK: Football Card Trader is the property and trademark from the developer Topps.

Topps is back with the all-new KICK 2016, the only real-world, real-time football trading card app. Only in KICK 2016 can you play cards and earn points in real-time based on how actual players perform on the pitch. Follow the excitement as the live action unfolds in every Barclays Premier League, Bundesliga, UEFA Champions League, UEFA Europa League and Major League Soccer match with KICK 2016.

New this season:
*FIVE-A-SIDE: Pick your starting five in a new quick-play card battle game. Play anytime, anywhere, play one game, or twenty, Five-a-Side will always be available for your football fix.

*NEW CLUBS: The BIGGEST competitions and clubs in the WORLD are coming to KICK. The UEFA Champions League and Europa Leagues will be in KICK 16. Messi! Ronaldo! Zlatan! will be available in KICK for the first time ever.

*IMPROVED PLAY: THE POINTS CHASE IS EVEN BETTER. Introducing contests, KICK now offers the ability for fans to be grouped together to compete to win rewards. Chase points by league, club or competition. Glory can be yours and you can earn a coveted Game Changer card.

*FLOW OF THE GAME SCORING: Watch live matches and score points with your best KICK 2016 player cards. Our improved “flow of the game” scoring system allows users to predict momentum changes, swap cards in their starting XI, and feel the excitement of every touch, pass, tackle, shot, and goal. With KICK 2016, more events turn into more points ensuring that only the smartest fans will win.

*AMAZING NEW CARD SETS: Tired of only one base card per player? How about five! KICK 2016 launches with five base cards per player, each one scoring differently based on rarity. Plus, new limited-print cards indicate card circulation as they are being sold so you can best time your packet openings. But hurry, once a certain number is sold, they are automatically sold out! And with stunning new insert card sets released daily, you’ll be able to chase all your favorite football stars.

*TRADE LIKE A PROFESSIONAL: KICK 2016 has the best football card collecting community in the world! All-new expanded trading allows for up to 18 cards to be swapped in a single deal. And with multiple leagues, you can execute mega-deals, like Wayne Rooney, Sergio Aguero, Thomas Muller, for Bastian Schweinsteiger and Andrea Pirlo. A new Trader Score allows you to rate your fellow traders on their trustworthiness and deal-making ability. And with the new Locked Card feature, you can prevent annoying offers for your favorite cards as well as show them off.