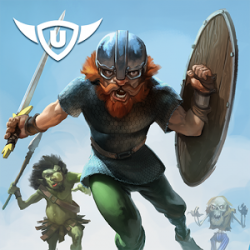 Mighty Viking – An Incredible Viking Game
Your foes are closing in. In the Viking game Mighty Viking, you fight hordes of monsters and wild creatures as a Nordic warrior. With your sword and battleaxe, you\’ll cleave through never-abating floods of attackers. Vanquish your foes and face down fire-breathing dragons. Put your courage and your skill to the test! Let your weapons clatter and clang in this exceptional reaction game and leap into battle on your smartphone or tablet. Countless features, options and possibilities lie at your fingertips! These include:
* Unique special attacks, such as the beer cloud, which envelops your opponents in the Viking game; support from a friend in the skies, who will attack from above; or tasty mushrooms, whose consumption slows down time for you.
* Health points and Gold – reaction game resources that you can refresh when necessary
* Fearlessly fighting fire-spewing dragons
The Battle Begins!
Skill and bravery, attack and defense – the fast-paced Viking game Mighty Viking will put your strength and skill to the test. Push back the opposing forces and battle your way through a fantastical setting. Use quirky special attacks – be it beer or decelerating shrooms – and let yourself be blown away by the extraordinary virtual battles in Mighty Viking.
Valhalla Can Wait!
Blow by blow, strike by strike, use your sword or your battle axe to fight different creatures. If your attackers manage to overwhelm you, you lose. So you\’d better make use of all your skill and reflexes to defend yourself, fend off your foes and avoid defeat. Because Valhalla, the hall of fallen warriors, can wait. Awaken your inner Viking and play now! The Mighty Viking app can be played for free – but in-app purchases are also possible.

0
Rule the skies with this 3D strategic airline game! Your mission: choose destinations, invest in aircraft and design ...
END_OF_DOCUMENT_TOKEN_TO_BE_REPLACED

0
Searching The Light – game in the genre platformer with a unique atmosphere is ready to take you ...
END_OF_DOCUMENT_TOKEN_TO_BE_REPLACED