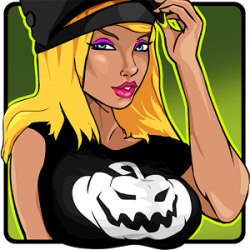 In Newspaper Boy – Halloween Edition you must throw explosive pumpkin heads into neighborhood houses on Halloween night! A free and funny action game with over 100 horror levels to master with candy collecting and 3 star feature. You can buy special upgrades for your bike and share your achievements with your friends.
The objective is simple; simply toss pumpkins filled with dynamite into houses and windows to cause explosive fun. Highly influenced by the classic retro game Paperboy but this time a little more violent. Also inspired by iconic horror movie characters we all hate to love like these five killers; Freddy Krueger, Jason, Ghostface, Michael Myers and Leatherface. The game is released just in time for Halloween but is so fun that it can be played anytime of the year. It features Death himself, also known as the Grim Reaper, who will hitch a bike ride cause he missed the bus!
Hilarious fun!
* Key game features *
► Toss or throw dynamite-filled pumpkins.
► Break as many windows as you can.
► Create explosive combos by breaking all windows.
► Collect candy and avoid obstacles.
► Over 100 objectives to complete.
► View your progress in the neighborhood map.
* Optional Features *
– Upgrade your bike to increase its performance.
– Buy cool swag for your bike.
– Buy handy weapons and special items.
– Complete side objectives to get more candies.
Follow us
Facebook: https://www.facebook.com/brutalstudiogames
Google+: https://plus.google.com/108527184837199893581/posts
Twitter: twitter.com/brutalarcade

0
Rule the skies with this 3D strategic airline game! Your mission: choose destinations, invest in aircraft and design ...
END_OF_DOCUMENT_TOKEN_TO_BE_REPLACED

0
Searching The Light – game in the genre platformer with a unique atmosphere is ready to take you ...
END_OF_DOCUMENT_TOKEN_TO_BE_REPLACED