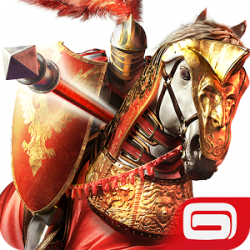 Live the fantasy: Be a knight & joust your way to victory! Compete with thousands of other players in games of glory & adventure! This is the most intuitive, action-packed & visually stunning knight combat game on touch screens!
JOUST LIKE A KNIGHT!
√ Experience the thrill of fast-paced & highly addictive jousting for free
√ Sharpen your war skills with precision timing & aim
√ Battle ruthless foes & rival clans across 5 leagues to seize their castles & thrones
√ Embark on an adventure across the kingdom, become a champion & etch your name into history!
BONE-BREAKING ACTION
√ Motion-capture animations for knights & horses immerse you in battle like never before in a free game
√ Enjoy stunning, lifelike 3D graphics and dynamic camera angles
√ Compete in a breathtaking environment with changing weather conditions & time of day
√ Send rivals flying with real-time ragdoll physics & slow-motion effects
ARM YOURSELF FOR VICTORY
√ Unlock over 120 mounts, lances, armors, helms & more
√ Upgrade them at the Blacksmith to gain an edge over opponents
√ Use temporary boosts wisely to triumph in your adventure
√ Customize your crest to strike fear into your rivals
THROW DOWN THE GAUNTLET!
√ Challenge other players in asynchronous multiplayer games
√ Enter weekly PvP multiplayer tournaments for glory…
√ …and win King-sized rewards!
Will you ride to victory, or fall in battle?
These are troubled times for you & your people. Your kingdom is in debt, the king slain in war, no one has claimed the Champions\’ Thrones, & enemy clans are massing at the kingdom\’s borders.
Embark on an epic quest & get ready to battle your way through intense solo and multiplayer challenges in this free new jousting game. Journey from castle to castle in search of adventure & action.
Claim the Champions\’ Thrones with your friends. Become a legend of jousting, grab the tournament chest & save your kingdom from the hands of the awful Lord Cunnings.
Forget about fantasy MMO games, castle games & war games. If you are looking for a true fantasy adventure, this free game is for you. It features massive multiplayer online (MMO) tournaments, clans, epic knight battles, all set in a breathtaking medieval fantasy kingdom, for free. The war for the Champions\’ Thrones is on!
G+ support is temporarily removed. It will be back in a future update, along with an achievement system.
_____________________________________________
Visit our official site at http://www.gameloft.com
Follow us on Twitter at http://glft.co/GameloftonTwitter or like us on Facebook at http://facebook.com/Gameloft to get more info about all our upcoming titles.
Check out our videos and game trailers on http://www.youtube.com/Gameloft
Discover our blog at http://glft.co/Gameloft_Official_Blog for the inside scoop on everything Gameloft.
_____________________________________________
This app allows you to purchase virtual items within the app and may contain third-party advertisements that may redirect you to a third-party site.
Privacy Policy : http://www.gameloft.com/privacy-notice/
Terms of Use : http://www.gameloft.com/conditions/
End User License Agreement : http://www.gameloft.com/eula/

0
You are a powerful mutant beast battling through a terrifying laboratory run by merciless mechanical guards. Defend yourself ...
END_OF_DOCUMENT_TOKEN_TO_BE_REPLACED

0
Strategy is essential in this game, where you control a team of heroes and use cards to make ...
END_OF_DOCUMENT_TOKEN_TO_BE_REPLACED