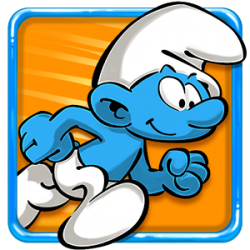 *** SMURFS EPIC RUN: Run away from Gargamel\’s spell to free your fellow Smurfs! ***
Gargamel\’s has casted an evil fog spell to capture all the Smurfs. The whole village is gone and you\’re the only Smurf left! Run away from the fog, stroll across a vivid world, collect iconic Smurf items and save all your fellow villagers to become the true hero of the day!
FEATURES
* RUN, jump, glide, stomp, dash… your way through more than 100 levels to free all the captive Smurfs.
* DISCOVER a vivid and lively world directly inspired from the original Smurf comic-books.
* PARKOUR different locations of the Smurfs world including the village, the forest, the mine and Gargarmel\’s Castle!
* PLAY with your favorite Smurfs including Smurfette, Papa Smurf, Handy Smurf, Grouchy Smurf and more than a dozen other iconic characters!
* EQUIP your Smurfs with companions, power-ups and trinkets for awesome bonuses
* COMPETE against the world and your friends in the Weekly Tournament. Who will run the longest from the evil fog?
* COLLECT dozens of items from the Smurf universe to complete sets and get awesome rewards.
* EARN great prizes everyday by collecting Golden Keys, completing Daily Missions or asking the Farmer Smurf for his Good Deals.
Game available in: English
Stay on top of your game! Get the latest news, deals, and more at….
FACEBOOK: http://facebook.com/SmurfsEpicRun
TWITTER: http://twitter.com/smurfsepicrun
YOUTUBE: http://youtube.com/user/Ubisoft
PLEASE NOTE:
* This game is free to download and play but some game items can be purchased for real money. You can disable in-app purchases in your device\’s settings.

0
Have a blast! Bomb oodles of nasty critters in a series of 30 wicked mazes! Defeat hellish bosses ...
END_OF_DOCUMENT_TOKEN_TO_BE_REPLACED

0
Box Jump Monster Dash is a brand new game from the makers of the legendary Follow the Line ...
END_OF_DOCUMENT_TOKEN_TO_BE_REPLACED