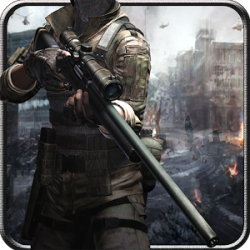 SWAT Sniper Shooting is the best fps shooting game. SWAT Sniper Shooting is a military action game that takes being far-sighted to a new level. Are you accurate enough to scope your enemies from across the map?
Mission:
You need to move fast and don\’t give your enemies time to shoot you because your life will drop and you will lose the battle when you die. Shooting more enemies means more chances to survive into the army mission. Yes, that is the task: to be able to shoot before thinking about shooting them.
An arrow that is pointing at the enemy head shows the locations and movements of enemies.
Features:
– EASY and INTUITIVE controls
– Ultra REALISTIC 3D graphics and cool animations
– Tons of best WEAPONS
– ADDICTING game play
How to Play:
1- Touch the screen for look anywhere left, right, up or down.
2- Move forward, backward, left or right with joy stick controls.
3- Tap Fire button fire.
4- Tap and hold run button for running fast
5- Detect enemies with the help of arrow pointing top of the enemies head
6- Increase your Health by picking the Health box

0
Welcome to a mysterious hotel, where guests are served with… puzzles?!Five brave, young adventurers find themselves lost, with ...
END_OF_DOCUMENT_TOKEN_TO_BE_REPLACED