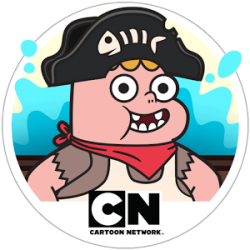 Ahoy, mateys! Join Clarence and friends on a swashbuckling quest for pirate treasure in Thirty Days & Seven Seas!
PIRATE POWER
Thirty Days & Seven Seas lets you play as Jeff, Sumo and Clarence in their pirate personas, Captain Blackhook, Crusty Pete and Mr. Tobias J. Tobias. Each one has radically different attacks and can spend doubloons with Chad the Quartermaster to unlock and upgrade more skills.
AS SEEN ON CLARENCE
Based on the board game seen in the Clarence episode \”Breehn Ho,\” Thirty Days & Seven Seas features tons of dice-rolling, card-playing fun. It also adds combat to the mix, in the form of turn-based strategic battles against enemy pirates.
SCURVY SCALLYWAGS
Journey through a variety of exotic lands, each packed to the gills with pirates, ghosts, savages, monsters, and ne\’er-do-wells who want to destroy your ship, capture your crew and/or steal your booty!
FEATURING THE ORIGINAL VOICE CAST
Are you hardy enough to defeat the legendary Kracken and win its even more legendary treasure? Find out in Thirty Days & Seven Seas\’ hilarious new story, featuring original voiceover by the cast of Clarence.
Batten down the hatches, swab the poop deck and set sail for adventure with Clarence in THIRTY DAYS & SEVEN SEAS!
*********************
This game is available in the following languages: English, French, Italian, Spanish (Latin American), Portuguese (Brazilian), Russian, Turkish, Arabic, Chinese, Korean, Japanese
If you\’re having any problems with this app, feel free to contact us at advanced.platforms@turner.com. Tell us about the issues you\’re running into as well as what device and OS version you\’re using.
*********************
PRIVACY INFORMATION: Your privacy is important to us at Cartoon Network, a division of Turner Broadcasting System, Inc. This game collects and uses information as described in Cartoon Network\’s Privacy Policy linked below. This information may be used, for example, to respond to user requests; enable users to take advantage of certain features and services; personalize content; serve advertising; perform network communications; manage and improve our products and services; and perform other internal operations of Cartoon Network web sites or online services. Our privacy practices are guided by data privacy laws in the United States. For users residing in the EU or other countries outside the U.S., please note that this app may use persistent identifiers for game management purposes. By downloading this application, you accept our Privacy Policy and End User License Agreement, and you give permission for such uses for all users of your device. The Privacy Policy and End User License Agreement are in addition to any terms, conditions or policies imposed by your wireless carrier and Google, Inc. Cartoon Network and its affiliates are not responsible for any collection, use, or disclosure of your personal information by Google or your wireless carrier.
Terms of Use: http://www.cartoonnetwork.com/legal/termsofuse.html
Privacy Policy: http://www.cartoonnetwork.com/legal/privacy/mobile.html

0
You never realized playing with math could be so exciting. Think fast, build up the Fever-O-Meter and reach ...
END_OF_DOCUMENT_TOKEN_TO_BE_REPLACED

0
If you like cute kitties, you\’ll love this game!Kitty Pawp is an exciting new bubble shooter that\’s all ...
END_OF_DOCUMENT_TOKEN_TO_BE_REPLACED

0
Explore the world of Beeland and meet the singing Babees, the crazy Busy Bees and the cheeky spiders ...
END_OF_DOCUMENT_TOKEN_TO_BE_REPLACED