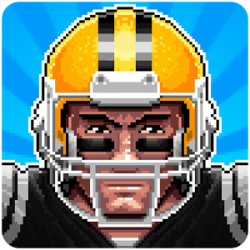 NEW SEASON 2015 is finally here!
From the creators of the widely acclaimed Touchdown Hero comes the official sequel for the 2015 season!
Enjoy TOUCHDOWN HERO: NEW SEASON now in English, Spanish, Brazilian Portuguese and French!
◉ Return to the field to outmanoeuvre the defenders! Use your SPEED and STRENGTH to wow the crowd!
◉ Decide when you want to RAM, SPIN or FAKE to breakthrough towards the TOUCHDOWN ZONE!
◉ CUSTOMIZE your player from head to toes and show what you’re made of!
◉ Score TOUCHDOWN after TOUCHDOWN to beat high-scores and climb the ranks!
TOUCHDOWN HERO: NEW SEASON is even bigger, better and more fun!