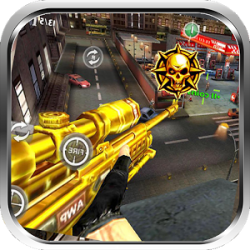 Warfare sniper 3D is best sniper shooting game 2015 . You are Glous Miller, the legendary super-sniper. Are you going to rot in prison for being too good at your job, or are you going to team up with a hot babe and save the world? A man of your skills is too valuable to make license plates, so buckle up because this is going to be one wild ride!
✓ Realistic 3D shooting and effects
✓ 2 sniper rifles – they differ in zoom distance, clip size, accuracy
✓ Thrilling cinematic story
✓ Innovative accelerometer and touch controls

0
Gap Jump is an addictive mini arcade game with simple one-touch gameplay.Help your cube roll from one column ...
END_OF_DOCUMENT_TOKEN_TO_BE_REPLACED

0
Before you play, representing a new series of adventure puzzles Troll Face Quest, where each level you have ...
END_OF_DOCUMENT_TOKEN_TO_BE_REPLACED

0
Free for a limited time! Don\’t miss out!Head out to sea to reveal the shocking secrets of the ...
END_OF_DOCUMENT_TOKEN_TO_BE_REPLACED