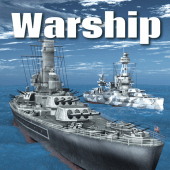 The average rating is 3.90 out of 5 stars on playstore.
If you want to know more about Warship War :Navy Fleet Combat then you may visit My School Life support center for more information

All the apps & games here are for home or personal use only. If any apk download infringes your copyright,
please contact us. Warship War :Navy Fleet Combat is the property and trademark from the developer My School Life.

Warship War – Navy Fleet Combat is the best game allowing you to experience the famous naval battles of the Second World War.
You can be an admiral of a navy fleet and lead numerous battleships, aircraft carriers, destroyers, submarines, and gun ships, which are made based on a thorough historical research.
You can join a historic battle by making your own fleet.
Be an admiral and command your fleet to win the war!
OR lead the war to victory
You can enjoy Warship War – World War 2 Navy Fleet Combat for a free. Please download it right now to enjoy the game.
You must have an internet connection to play the game.

Features :
It has numerous battleships (e.g., IOWA, Yamato, Bismarck, Hood, and KingV) actually existed in the history.
Missions naval battles in the history.
Experience the realistic naval battle owing to the best graphics.
You can make your own fleet by building up to five warships.
It has a number of fighters and tanks.
Support Google Play game services.