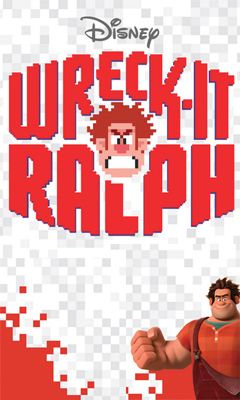 Arcade game created on the basis of the animated film \”Ralf\” including some modes – Wreck-it Ralph. Meet Ralf — a hero from eight-bit consoles and now from a new animated film for children and adults from Disney. You should pass three different games which differ on a genre. In the first series of game you need to repair windows, which were broken by Ralf. Operate Felix — master of all trades, who will move on the multistoried building to change glasses. Be careful you are waited for by a set of traps in the form of balconies and partitions through which you cannot pass. Avoid Ralf, he will dump bricks on your head. Yours tasks is to repair all windows in a minute and to get on the next floor. The second series is a runner game. Here you should help Ralf to get as high as possible, gathering candies, aerated water and other sweets. Jump from one petal of a caramel tree on another, using device accelerometer. The third series is a platformer. Help sergeant Kalkhun to destroy butterflies and bugs, hold on some waves of approaches and pass to the next level. Collect abilities of the weapon, which will allow you to shoot in several sides, to shoot with explosive grenades and more. Destroy all your opponents on a game field, having picked up ability of a bomb or a grenade.

Guide for Play & Download Wreck it Ralph on PC,Laptop.

0
Jumpy cat – control a funny cat falling down after jumping of a tall building. Catch all the ...
END_OF_DOCUMENT_TOKEN_TO_BE_REPLACED

0
Block house – build the most unbelievable constructions out of colorful blocks of different shapes. Be fast, the ...
END_OF_DOCUMENT_TOKEN_TO_BE_REPLACED

0
Town jump – control a jumping character. Tap the screen of your device in time to make the ...
END_OF_DOCUMENT_TOKEN_TO_BE_REPLACED