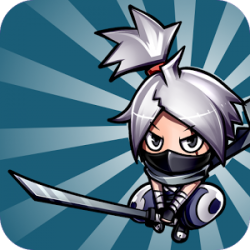 ZOMBITSU (noun: zom-bit-su) – a traditional form of Japanese sword combat against warriors of the undead.
The evil Lord Nakatomi has torn apart your land and unleashed his army of soldiers for total destruction. Play as Hiro, the last known Zombitsu expert, on his epic journey through the glorious streets of his Japanese village, the devastated lava world and the picturesque floating kingdom.
Run, jump and fight your way through the hordes of zombies to become an unstoppable ninja.
Are you brave enough to take the challenge and save your world?
******
CHOOSE YOUR OWN PATH
Enjoy greater freedom of movement than any other 3D runner as you run and jump through wide, tall and open levels.
OLD SCHOOL ARCADE CONTROLS
Use tilt to steer and two buttons to jump or attack. Combine button presses in sequence to perform combos.
COMBAT THE ZOMBIE HORDES
Slice and dice your way through the undead army of Lord Nakotami. Perform devastating combos such as the Hammer Chop or Uppercut.
RANDOMLY GENERATED LEVELS
Each run is unique and each level is filled with random paths and secrets that require keen attention and platforming skills
UNLOCK THE ANCIENT SECRETS OF ZOMBITSU
Complete missions to learn new combos and discover power-ups. Will you learn the dragon dash or unlock the fireballs?
THREE AREAS TO EXPLORE
Run through the Castle, Sky and Lava areas, each with their own unique challenges and dangers.
******
Read more on our blog here
Email support enquiries or suggestions to: support@rumastudios.com
Follow us on twitter: @rumastudios
Like us on Facebook: https://www.facebook.com/rumastudios

0
\”Dead Stop is a monster mash of pure fun…\” – Arcade Sushi\”Dead Stop is one of the best ...
END_OF_DOCUMENT_TOKEN_TO_BE_REPLACED

0
Following the huge success of My Dolphin Show with more than 30 million installs, get ready for My ...
END_OF_DOCUMENT_TOKEN_TO_BE_REPLACED

0
Light the candles, and banish the evil that haunts an old mansion. Father David went in there first, ...
END_OF_DOCUMENT_TOKEN_TO_BE_REPLACED